What is the Light and Sound Mind Machine?

Light and sound machines are electronic devices that play binaural beats along with strobe light. The person wears goggles that look like sunglasses. These glasses contain red and green LED lights. The lights play in pulsating patterns and create a spectrum of color. The combination of the sight and sound stimuli change the brainwaves of the wearer. This creates feeling of relaxation and sometimes an altered state of consciousness. They are also known as Dream Machines.

When Were Mind Machines Discovered?

The first people to uses this concept were prehistoric tribes. Drumming, chanting and dancing around a flickering campfire would have created the same effect. Shamans would have gone into trances or seen hallucinations. This would have been the first connections to the spiritual world.

William Charles Well was an 18th century Scottish scientist. Well was famous for his theory of natural selection. His writing regarding that subject was used to validate racism and the superiority of the Anglo males. Despite this negative input to our history books, he investigated eyesight. He did study on the phenomenon of seeing one object with two eyes. The notion that two beams converge into one thing was significant in later development of mind machines. 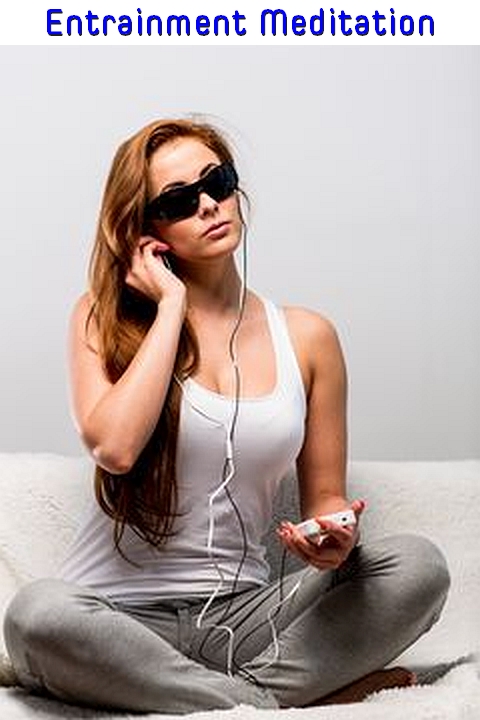 Read more about entrainment and how it works. This page will be helpful if you want more detailed information about how the process works and where to purchase mind machines.

In 1924 Hans Berger invented the EEG machine to measure what was going on inside the brain from outside the surface. He concluded that there were various electric waves in inside the brain. This concept was laughed at by his contemporaries.

In the 1940s William Gray Walter wrote books about brain activity. He discovered many more types of brainwaves and experimented with strobe lights.

The first real Mind Machine was invented by Jack Schwartz. He combined pulsing lights and colored strobes. He was studying the powers of the mind and how the activity of the body relates to psychology.

Brian Gysin and William S. Burroughs were both creative people. In the 1960s they made a psychedelic device out of a cardboard with cutouts that revolved on a record player. When lights shined through, it made a strobe effect. They added music and colors for a performance art piece and, no doubt, a great trip.

With the advent of digital electronics, the machines have advance into more sophisticate devices. They can enable people to be much more accurate in controlling brainwaves. The effects can be personalized according to what results an individual is desiring. To answer the question of “What is the Light and Sound Mind Machine?” I can answer that it any machine that changes brainwaves. Cutting edge versions are being updated all the time. The basic premise is the same. There are apps on phones that can be downloaded and used with or without special glasses.

Are “Light and Sound Machines” Useful?

Brainwave machines are designed for a variety of purposes. Some of these are an aid to meditation, help with focus and study, recreation, and spiritual enlightenment. Some have called it instant meditation because it can produce results that take years to acquire. Others call mind machines a drug-free high because of it causes a form of hallucination and euphoria.

There are descriptions of people combining the machine with pot use or alcohol consumption to make an even wilder trip. However, there are certain warnings that are very important to note. First, nobody with a history of convulsions or epilepsy should do this. The strobe effects with cause bad result and be possibly very dangerous. Also, the goggles must always be used with the eyes closed. Serious harm to the eyes could result. When I first tried this, I was concerned that I would forget and open my eyes. But I never did, and I think the eyelids automatically close with the bright lights.

There has also been research with children with learning disabilities. They were reported to have improved focus and better learning skills after the treatment. This could be a help to those suffering from ADD and autism.

What Do Brainwaves Do?

The basic premise is called entrainment. This is the principle of synchronization. The brainwaves sync to outside stimuli and change. This is because the type of waves in the brain have different effects on the body. Beta waves associated with active minds and anxious thoughts. Alpha is relaxed but still awake. Theta waves are a dream state, hypnosis, or deep meditation. The Delta waves are a deep sleep state.

Those using mind machines will be brought into Theta or Delta wave condition. This is the area that is close to the unconscious, the spiritual, and hidden creative visions.

My experience has been with a Proteus Sound and Light portable machine. It’s simple and light weight and works great. However, in my research I have discovered an different device where you can keep your eyes open. This was always on my mind with the Proteus. I kept thinking I might accidentally open my eyes and hurt them. They are slightly more expensive than the classic Proteus. I wiil post a link to those at the end of this post. I think the added visual quality of the Ganframes may be well worth it. But I have not tried them, so I could not say from experience. 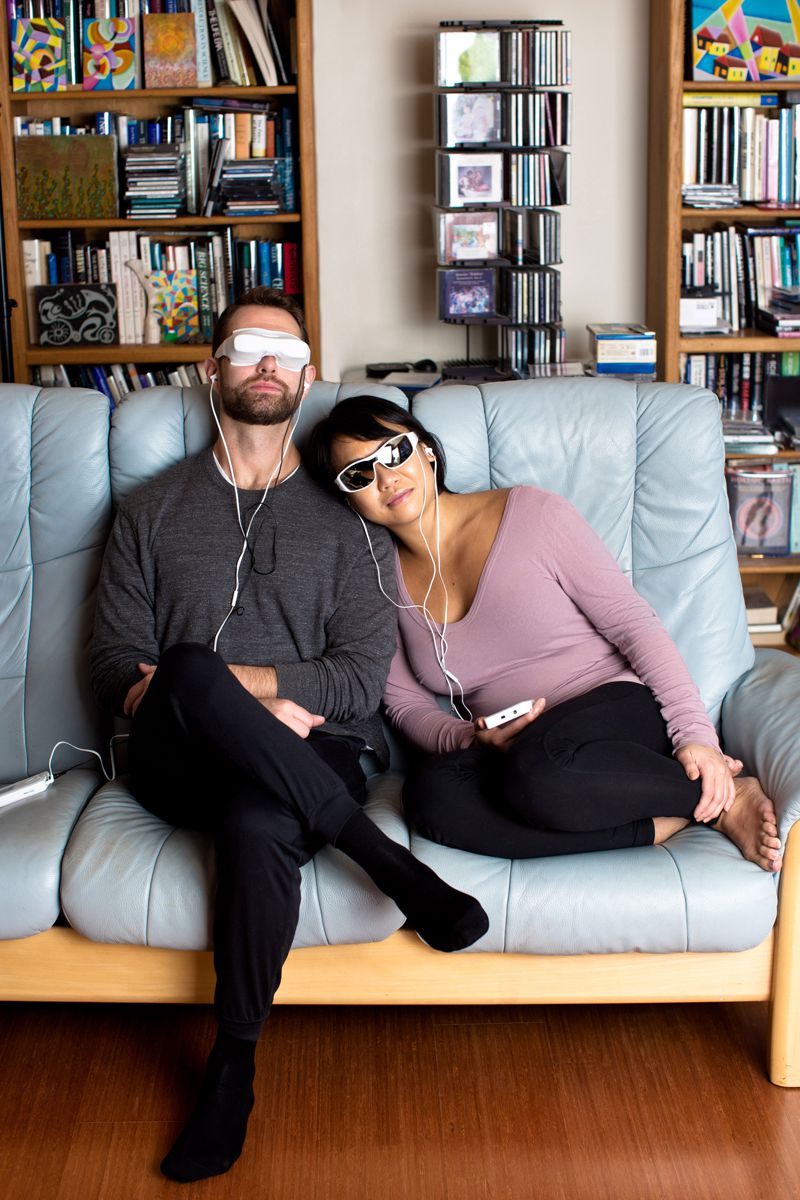 If you want more information about Mind Place and how they work this page will explain the benefits in more detail and show you where to place a secure order. They range from simple to powerful complex machines with more options.

These are made by MindPlace. The Procyon Audio Visual Synthesizer is designed to experience light and sound with eyes open or closed with Procyon DeepVision™ Ganframes.

How Do Mind Machines Work?

The brain changes to match other frequencies from outside of it. Brainwaves are called waves because they cycle at regular intervals and there is a cycle of reoccurring patterns. These patterns are actually electric currents. The neurons in the brain communicate with each other by these currents. The change in the frequency changes the way the chemicals flow in the connections in the neurons. Therefore,  moods changes with different frequencies.

The chemicals are released just as if someone had taken a drug to relax. Or the same as if they had done anything else to change the natural flow of chemicals in the body. This flow of chemicals regulates whether we are happy, sad, restless or sleepy.

My Experiences and More Info

I first tried Light and Sound Machines in a spa atmosphere with other people and attendants. I was astounded at the way my mind could change just from these lights sounds. It was relaxing and enjoyable. I felt as if I was hallucinating, but as soon as the goggles stopped blinking, the images stopped. It was not some condition that stayed or conflicted with my sober, waking state.

Later I purchased my own machine and have used it as a form of meditation, relaxation and entertainment. It is like watching a light show, but more intense because it encompasses you. The experience is inside your own brain more that if you were simply viewing it or listening to music.

For more information about binaural beats to accompany your machine, I have written a related blog post about them.

Many of the systems are elaborate and expensive. The one I purchased was a small portable device. It works great. However, I am sure that, as with any electronics, there is a difference in quality. Also, I use them without even reading the instructions and it is always fun. I am sure if I studied more, I would get more benefit.

I myself meditate frequently without the use of any device. In my opinion it is very important for my mental health. My preference is to practice a version of mindfulness. Chanting also produces good results. Many people that scoff at meditation and say they could never do it. For some reason, they don’t even want to try. They just consider it some New Age hocus-pocus. For me, it is a necessary ingredient in my search for serenity and spirituality. I would recommend the mind machines to anyone interested in knowing more about themselves and exploring consciousness.

In asking “What is the Light and Sound Mind Machine?,” I would like to give links to two sources that have additional information on these subjects.

One paper is a fascinating read in the Journal of Neurotherapy. In this study named “Use of Auditory and Visual Stimulation to Improve Cognitive Abilities in Learning-Disabled Children” by Ruth Olmstead, it was shown how audio visual (AV), stimulation affected children with learning abilities.

The conclusion was that it had the potential to improve cognitive ability and quality of life for children with similar problems. What a wonderful thing this would be for autistic. I can’t imagine why more people don’t research this. Parents of children with autism or ADD could have hope for a functioning child. They could end dependency on medication and see their child be able to work, play and socialize in school and society.

To read the actual paper see the Journal of Neurotherapy. Use of Auditory and Visual Stimulation to Improve Cognitive Abilities in Learning-Disabled Children
by Ruth Olmstead

Another study is the light and sound studies of Thomas Budzynski named “The Clinical Guide to Sound and Light”.

An in-depth research study in the area of light and sound techniques. This fascinating article gives information about the many uses, reasons and results in the areas of light/sound, biofeedback, meditation, E.E.G.s, and brainwave applications. With photic stimulation and imagery, subjects have changed brainwaves, altered consciousness and created tranquility.

Studies also showed that binaural beats produced deep relaxation. Most people tested had varying degrees of changes including hallucinations and some even repressed memories resurfacing. Some of those tested had a resistance to the tests. This is like the idea that people can’t do anything they don’t want to under hypnosis. People that must be in control will not allow their brain to be manipulated.

This study has an amazing amount of detailed research on the Theta state, learning and uncovering memories. They discuss treatment for drug withdrawal. Possible use for help for those with Attention Deficit Disorder with light and sound machines is discussed, as in the Olmstead paper.

To read more about the subject here is a link to the entire article from Stanford University: The Clinical Guide to Sound and Light by Thomas Budzynski, PHD
Section One: SELECTED RESEARCH ON SOUND/LIGHT